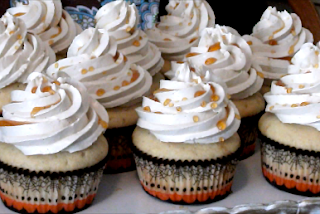 As fall is fast approaching, we’ve decided to bring you a new series called BAKED.  It will be a little bit of this and a little bit of that.  Yummy things we like to bake.  Our first in the series has a definite fall flavor.  Melanie wanted to do apple cider cupcakes, and Jennifer wanted to make salted caramel cupcakes.  So we compromised and made Apple Cider Cupcakes with Salted Caramel Frosting and Cider Syrup Drizzle. The cupcakes are an adaptation from pia recipes, with our own spin on it of course.  And the frosting came from John Barricelli, which we spun with the addition of the drizzle. 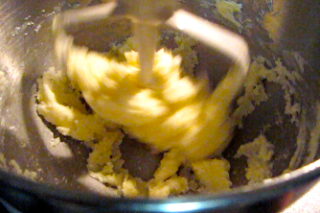 This frosting is Jennifer’s favorite.  It starts with a Swiss meringue.  And becomes a delicious velvet butter cream; you’ll love this one. 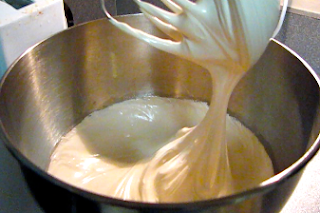 With the addition of Amaretto, and the Apple cider drizzle these cupcakes are over the top fall goodness. 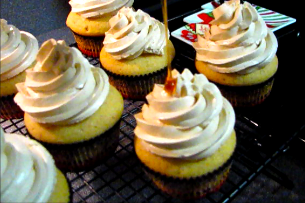 Preheat oven to 350. Grease or line 12 cupcake wells.  In large bowl, cream together butter and sugar. Add eggs, one at a time, beating well after each addition. Sift together flour, baking powder, spice, and salt. Add 1/3 of the flour mixture to the butter/sugar mixture, then 1/2 of the cider, and repeat, ending with the last of the flour and mixing only until incorporated. Pour into prepared cupcake pan, filling each cup 3/4 way full. Bake 20 minutes or until a toothpick inserted in the center of the cupcake comes out clean.

In a heatproof bowl set over (not in) a pan of simmering water, whisk together egg whites, sugar, and salt until sugar has dissolved; remove from heat. Using an electric mixer on medium, beat mixture until fluffy and cooled, about 15 minutes. Increase to high; beat until stiff peaks form. Reduce to medium-low; gradually add butter, beating until fully incorporated, about 3 to 5 minutes.

Simmer at medium heat until almost gone, thick and syrupy.  Ours yieled about 2 tablespoons.

NOTE: The Cake Spinners reserve the right to remove any comments with profanity, personal attacks, spam, or any other material that we deem inappropriate.

We are Melanie and Jenn, two pastry chefs that have a passion for Pinterest. We noticed that when we tried some cake/pastry tutorials on Pinterest that there were pins that just did not add up. So we decided to publicly test cake/pastry related tutorials posted on Pinterest, and show you our results, including troubleshooting the tutorial if need be. We will also bring you snippets of projects that we are perfecting.